We congratulate Resurrection Catholic School’s Coach Scott Sisson and senior Sam Williams for being presented with The Lindy Callahan Distinguished American award. For Coach Sisson this award is given to a community member who has dedicated themselves to the service of young men and women through their time, effort, and/or financial support to uphold our nation’s values while supporting the sport of football.  We interviewed Coach Lewis Sims, lifelong friend, and colleague of Coach Sisson. Coach Sims said, “Coach Sisson was one of my baseball and football coaches while in high school at Moss Point in 1987-1990. He asked me to help him coach baseball in 1995, and is a huge reason I became a teacher and a coach. After becoming a teacher and a coach, he hired me for my first high school coaching job at East Central in 1989. We worked together at Moss Point in 2004-2005 before becoming an assistant coach and then head coach at Pascagoula. Coach Sisson was selected for this award because he has dedicated his life to teaching young people the values they need to succeed in life. Without Coach Sisson, many young men and women could have lost their way in life. He is a beacon to many who has shown his light of love and caring that has guided them down the path that leads to success in any endeavor.”

RCS’s senior, Sam Williams, was also selected to receive this prestigious award. Sam has been an intricate part of RCS’s football success throughout his time at RCS. Sam has committed to continuing his football career at The University of South Alabama in the fall of 2021.  He feels very proud and humbled to receive this award amongst his peers and with his former Coach, whom he respects. Sam says he follows Dr. Rick Cagle’s saying, “Work like it all depends on me, pray like it all depends on God and somewhere two will meet.”   And of course, he listens to his dad and biggest fan, who reminds him that “Sorry doesn’t fix it.”  Coach Denmark said, “One was my boss, the other my linemen. One a true friend, the other a future leader. Both brought the love of the game back to my heart. God, family, and football are in that order for these men. Thanks for the memories, Scott and Sam.”

We are always proud when members of the RCS family are recognized for their hard work and dedication.  Again, we congratulate Coach Scott Sisson and senior Sam Williams. 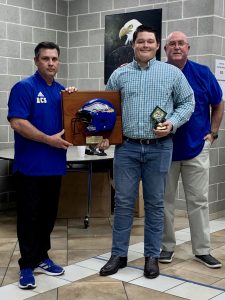